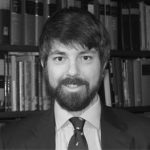 He has been granted the “Maturità  Classica” diploma and graduated in law with honours at the University of  Genoa in 2005 with a thesis on hull maritime insurance. He commenced his legal training in the Maresca law firm of which he became a partner in 2009 and had been admitted to the legal practice in 2008. He spent a legal training period  in a London law firm specialized in shipping, spent a training period for the Ministry of Foreign Affairs at the Consulate of Italy in Cape Town working at the Navigation Department and in 2009 followed a private international  law  course at  the Hague Academy of International Law. Member of the Executive Committee of the Young Group of the Italian Association of Maritime Law and member of the General Average Adjusters Association.
He is invited as a speaker at seminars and conventions in Italy and abroad.
He practices sailing and regularly participates to regattas. He is a member of the Italian Sail Federation  Disciplinary Court.
Areas of principal interest: construction and sale and purchase of ships and yachts, charterparties, air carriage, maritime accidents, international sanctions and arbitration.